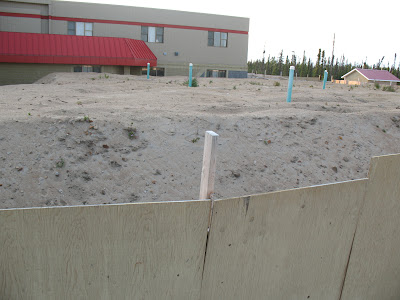 The long overdue auditorium for Central Labrador at the Mealy Mountain Collegiate.

"Bids on the tender, he said, came in at double what was expected." -- John Hickey. CBC

So who put the mound of sand there and the fence around it? Was it a contractor who won the bid to build the auditorium or did government employees do it?

I'm sure it wasn't the latter, so It must have been a contractor. If that is the case why wasn't the construction continued? One would assume that if the work had begun someone won the bid to do it. I mean, if a contractor didn't get the tender, who would start preparing the land and then suddenly stop?

Usually there is a general contractor involved and they subcontract some of the work.
Tenders were issued and someone obviously won or no work would have begun in the first place.

One would think that if a contractor wins the contract, they have to do the work no matter what, unless there is added work that wasn't anticipated before tenders were issued. In that case extra money would be justified but it should not stop the construction. The original contractor could have finished their work and a new contract issued.

My take on it is that government decided to have the worked stopped and started again to coincide with the election like they have done with other work such as the highway between Hvgb and Lab West and the work on the Goose River Bridge. To me its all a scheme to buy votes with our own money.

Watch out voters, you may be mislead again but this time in a much different way then the Metis were during the last election.
Posted by Norman Andrews at 7:20 PM

While everybody is sifting through the sand for the elusive needle of common sense and fairness, not to mention that ever elusive INTEGRAL, can any one fill us in on whether the Labrador Party will be fielding any candidates in the up coming election?
I have heard some rumor of one in Torngat Mountains, but that is it.

Like it's real hard to build a mound of sand in HVGB! I guess we can also expect to see mounds of sand going up next to the TLH, too?

Yes to brian and so true to wjm.

Isn't it great how the Energy Plan will mean lots of economic development in NEWFOUNDLAND thanks to LABRADOR POWER.

Let me just say this.Danny Williams supporters and yourself should not hold your breath for fear of an untimely death, waiting for Power from Labrador.

You see, there are still thousands of people across Labrador that Danny Boy must appease before the Lower Churchill Hydro Power becomes a reality.

The power push will come to shove in the near future.

Stay tuned, the sleeping giant will aweaken soon, we are only taking a cat nap.

Just so we're clear, I was being sarcastic!!!

OUT WITH DANNY SMALLWOOD!

"Dunderdale said the profits from oil and gas projects may be partly invested in the province's hydroelectric resources, including the Lower Churchill Falls development and a transmission line to Newfoundland. Continued ...

From what I see hear guys ,its now in your hands.Labrador must now act with the Governement to make sure that this resource benefits Labrador and Newfoundland.Dont screw it up guys,once was bad enough,lol.

Now that we have the money ,its time to create some jobs in wabush,uhmmmmmmmmmm,.........do you guys mind in a bunch of Newfoundlanders moving into the neighborhood.

"From what I see hear guys ,its now in your hands.Labrador must now act with the Governement to make sure that this resource benefits Labrador and Newfoundland.Dont screw it up guys,once was bad enough,lol."

Calvin, politically it is NOT in OUR hands, sadly enough. It is in the hands of the majority on the Island. Do you think they will vote against their leader who delivers lots of power to them for development, even if it is a complete rip-off for Labrador? Again. While it may well be good for them, it is so so hard to cheer them on when WE are the victims once again.
'If you rob Peter to pay Paul, you can always count on the support of Paul'.

yours truly
Blogroll Me!

My Favorite Sites To Date