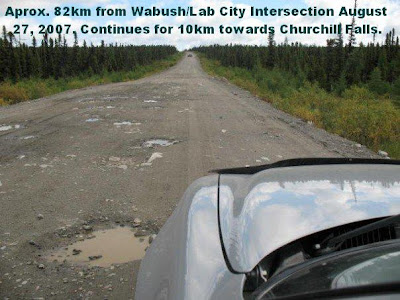 We just drove across Canada and the only place we had any problems was on the Trans Labrador Highway. We took the shortest route across; you might say the back roads, not the 401.

Anyway, if God can create the Earth in 6 days and we can drive across Canada in 6 and rest on the 7th., this province should be able to build a 500km paved highway between Lab West & Hvgb in 40 years. I say 40 years because that is how long i've been in Labrador and I worked on that road in the 60's. They especially should have been able to build that road with the help of our Federal Government which they have definitely gotten a lot of.

Question for you all: I wonder how much of the $16,000,000,000.00 (16 Billion Dollars) Labrador will get from the Hebron deal that Williams and his clan, supposedally made recently. Do you think, diddly squat or what?

In spite of the past and present efforts of our provincial governments the population of Labrador just went up by 3.

Labrador population control, hey? Is that the game the present and past provincial governments play with us?
Posted by Norman Andrews at 12:40 PM

In the choice between 'diddley squat', or 'what', I'd say that Labrador will get diddley squat from that Hebron 16 billions. Didley squat. I base that on the observation over the past few decades that Labradorians get 'diddley squat' of their own resources, and are poised to see even more of them go down the pipes in the near future (Hydro among them) with near zero return.
Mind you, I have no problem with them keeping all that oil money if they'd only let us keep ours!

Anyway as the previous commenter asked, Do you have any more road pics? I'm thinking of the Transportation Minister/Minister Responsible for Labrador's 'cheap seal' that is holding up so well, in spite of all the pot holes that are visible to the average person's eye.

Sorry, no other pics at this time. Didn't have much opportunity to take more, I guess because we were traveling with our four month old granddaughter aboard and with another vehicle.
It was near the end of a long and tiresome trip across Canada.
I'm sure there will be some more convenient times in the near future, but in the meantime there are some road pics and a video on Facebook's ****"Pave the roads to Labrador before someone gets killed" *****

Flights or roads: which is priority, Mr. Hickey?

I agree. An excellent article.

Way to go Mr. Pike and thanks to the Telegram for printing it in the firts place.

Just followed you over here Lloyd from Sues Blog.I hope that you guys dont mind a Newfoundlander here.

Lloyd ,i simply cannot believe that this is all that is done to the Trans-Labrador Highway.Just when you think that you have it bad ,you look at a differant area of our province to find those that have it worse in some cases.

Lloyd as for the 16 Billion from Hebron.If the Governemnet doesnt use that money to develop clean energy from labrador ,then they are the Idiots.
I just dont understand why Newfoundland and Labrador has to scratch and claw for everything that its entilted to under confederation.Im stumped.I just do not understand why such a rich area has to go with-out.

Hello Calvin;
I'd say Norm has no problem with Nfldrs, my son, just like he wouldn't have with visitors. Lots of fine Nfldrs, just like from anywhere else in this fine country.
Regarding the TLH - as far as I understand, darn near ALL the money gone in to it so far has had its source in Ottawa. It is the province who has been dragging its heels on the will to do it, and the dollars that go with it. We don't complain just for nothing, you know.

I just dont understand why Newfoundland and Labrador has to scratch and claw for everything that its entilted to under confederation.Im stumped.I just do not understand why such a rich area has to go with-out.

Calvin, what does Confederation have to do with anything?

No other province has had as high a proportion of federal money put into its roads as NL.

And no other highway in the province has had such a high degree of federal involvement as the TLH. The only way the federal funding might have been higher is if Labrador was a territory... and you know, some days....

It's the province of which Labrador is supposedly a part, not the federal government, that's dragged its heels.

It's funny to read in "Danny Smallwood's" (stealing that!) energy plan about how Labrador will benefit from the so-called development of the so-called Lower Churchill through jobs and procurement.

There is no mention of the revenues from the hydro dams, if they are built, once they are operational and generating revenue.

Who will profit? Will Labradorians have to go begging to St. John's to get their own money back? Isn't that what Danny Williams claimed the province had to do with Ottawa, and why he found the former Atlantic Accord so objectionable?

If Newfoundland can demand "100%, no clawbacks"... why, within the province, can't Labrador?

Pavement will also deterioate very quickly . You'll get lots of potholes and frost heaves especially where its very cold . Large trucks will ruin a paved road in very short order .It's harder & more expensive to maintain in the long run . At least with gravel it can be graded . A gravel road needs to be graded OFTEN, however.

yours truly
Blogroll Me!

My Favorite Sites To Date